The Mozilla Campus Club, BV(DU)COE, successfully organised a completely technical event taking place on the 29th and 30th of March, 2019. The name of the event was kept “FIBBLE” as in 'fi'x, scri'bb'le and batt'le'.

It was a two day event which included competitions on day 1 and a TechTalk on day 2. It was hosted by the team members of the Mozilla Campus Club as well as the volunteers. A total of 300+ students participated in the event.

Online registrations were open to all. The participants were given unique ID codes for their reference in the competitions.

Three competitions took place on day 1 of FIBBLE, i.e., 29th March , 2019. Around 180 participants were hosted on the first day of the event.

Doodler-  This competition was to bring out the creative side of the people. Participants were asked to report on 9:00 a.m. sharp. Then they were briefed about the event. All they had to do was take a picture anywhere in the college premises and simply make a doodle of it using the designing software of their choice. They were given two hours to do so. Around 40 students  in this. 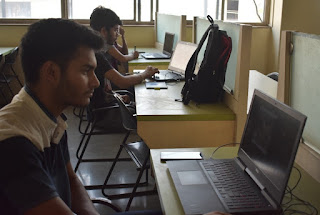 Technical Quiz-  This event ran simultaneously with the Doodler. In this, the students were to participate in a team of two and a total of three rounds were held. The reporting time was 9:00 a.m. The first round was an elimination round in which they had to take a test online on the Hackerearth platform. Then, ten teams were shortlisted based on their scores for the second and third rounds.

The second round was a logo quiz in which they were shown different logos on the projector screen and they had to recognize the logos and write them on a sheet provided to them.

The third round was again a question-answer round, in which they had to write down the correct answers of the questions shown on the screen. Around 50 teams participated I this particular event. This was to be taken place entirely on the Hackerearth platform.

Bug-Off-  This was the third and the last event of the day. The participants reported at 2:00  two were to participate in this.

The first person was given a problem statement and was required to write a program code for the same in languages, C, C++ or Java. While, the other person was given an incorrect code and was required to debug it accordingly. They were given three hours to complete a given set of questions. Also, after half the time, i.e., they were asked to switch their positions and complete the work the other had started. Around 20 teams participated in Bug-Off.

DAY 2 TechTalk- On the second day of Fibble’19, i.e., 30th March, 2019, a TechTalk was organised in the Medical Auditorium. It was scheduled to start at 2:00 p.m. Around 150 students attended the TechTalk including the on-spot registrations. reputed speakers from the Mozilla community were invited. The speakers were as follows:

1.    Mr. Hrishikesh Raverkar -  He is a tech enthusiast, a full stack developer, a technical architect and a resourceful tech lead at Webonise Lab Pvt. Ltd. . He is working on Ruby, Php, Js, AWS, and Docker. He spoke on Docker, introduction to Docker and its importance in the technological world.

2.    Mr. Gaurav Gahlot - He is an experienced Software Engineer at Cybage and his core competencies include Agile Methodologies, DevOps Practices, Docker and

Kubernetes. He is an active contributor and has participated in many developer community events and conferences to share his knowledge and experience . He spoke on Devops, better understanding of devops, what they are and how useful they prove to be.

3.    Ms. Mugdha Adhav - She works as a Software Engineer at InfraCloud Technologies. She has around 2 years of experience in Networking, Cloud, Software Defined Networks / Network Function Virtualization with a focus on Containerization and Kubernetes. In her spare time, she enjoys playing PC games and watching anime/series. She spoke on Clouds, an insight, the trends regarding clouds and their solutions.

4.    Mr. Prathamesh Chavan - He is a Computer Engineer and an Open Source enthusiast. He from Pune, India and is currently working as an Engineer at Red Hat.He has been contributing in various Mozilla projects since 2014 and became a Mozilla Representative in 2015. He spoke about LINUX .

5.    Mr. Achilles Gaikwad -  He works as an associate software maintenance engineer at Red Hat. He likes troubleshooting. He works mostly on CIFS, NFS, EXT4, XFS and underlying storage. He believes documentation is like Bible and loves reading source code. He spoke about history of LINUX.

7.    Mr. Arush Salil -  An Infrastructure Engineer with 4+ years experience of effective code management and deployment in a production environmnt at Infracloud Technologies. He spoke about state of software development in cloud native ecosystem.

They spoke upon various technical topics such as Docker, Devops and LINUX to enhance to students' knowledge in there 5 field. A break was provided in which snacks were distributed to the students.Also, the results of Doodler, Technical Quiz and Bug-off were announced and as promised, they were rewarded with cash prizes as well as other goodies.

The speakers were felicitated with hampers. Overall, the event turned out to be a Great success. Each of the participants as well as the club members were greatly encouraged through this event. The club looks forward to the next event.

Speaker – Naman Dhameja from Mozilla campus club. SQL is Structured Query Language, which is a computer language for storing, manipulating and retrieving data stored in a relational database. SQL is o

In the world of electronics, Raspberry Pi has its importance because of its cost and great performance. With the help of Raspberry Pi, the user can improve programming skills, build hardware projects

User experience design (UX, UXD, UED or XD) is the process of enhancing user satisfaction with a product by improving the usability and accessibility provided in the interaction with the product. User